Forgive me please but I moved to Thousand Oaks, CA in 2010 and have not updated this page. I'll try to get that "round tuit" fairly soon. (This is not to say Santa Maria is not a nice city, it is; I just needed to make this move for personal reasons.)

Santa Maria is a smallish city about 175 miles north of Los Angeles, California. The city itself has a population around 68,000 and the greater metropolitan area numbers around 100,000.

I live just north of Vandenberg Air Force Base and now and again get treated to nice shows when they fire off a rocket. This is a picture of the "twilight effect" on a Minuteman II missile as seen from my kitchen window; looking straight into the missile's exhaust (twilight effect is when the missile launches in the dark but climbs into the sunlight; it can lead to some spectacular light shows). 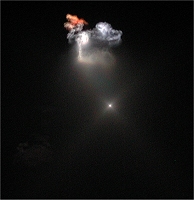 I've included my (and my company, Computer Knowledge's) general location on the graphic below (80K--give it a moment please).

Some of the things I like about Santa Maria and surrounds [most apply to Thousand Oaks as well - will be more specific later]:

The area has strong historical roots. The first town (La Graciosa) started at the south end of the valley in 1868. It lasted until 1877 when H.M. Newhall was granted the land the town was standing on and he ejected everyone. On April 12, 1875 Central City was registered as a town centered at the intersection of Main and Broadway. In 1882 Central City changed its name to Santa Maria in order to satisfy the US Post Office (a Colorado Town was already named Central City and mail was routinely misrouted). Ranching became a mainstay of the valley. Oil was found and a boom followed. As the oil fields began to dry the valley added farming and is now slowly adding grape vineyards and wine making. Indeed, even the famous have found the area; Fess Parker of Disney's Davy Crockett fame has opened a vineyard and premium wine making operation not too far away and a number of stars have homes in the Santa Ynez valley just to the south.

We all look forward to a great future in Santa Maria.

Through a special arrangement with Amazon.com we can offer you books at a substantial discount. You may find one or more of the following of interest...